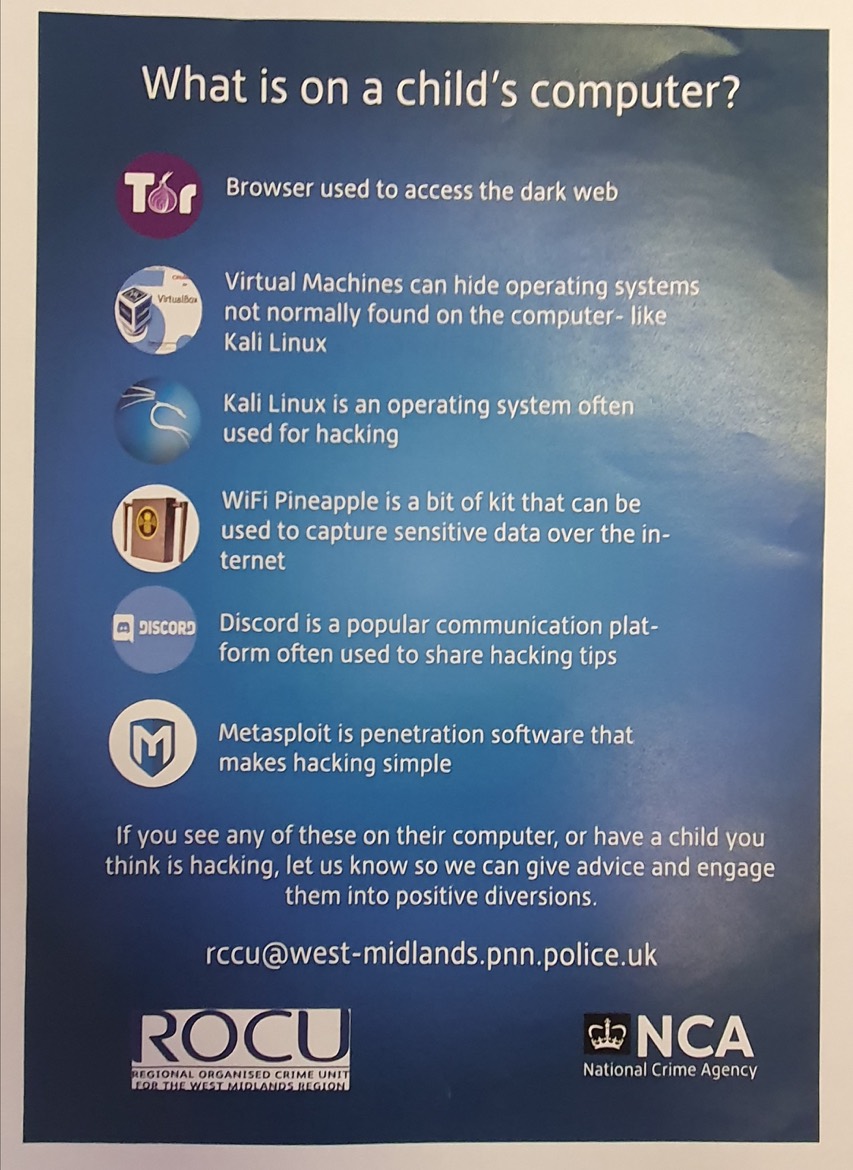 UK police deny responsibility for poster urging parents to report kids for using Kali Linux – ZDNet. Poster found via Twtter. Might not be real, if a kid is doing all this, they’re a smart kid, Kali seems to agree.

Must Read: Impact of Tomahawk-4 on Data Center Fabric Designs by Ivan Pepelnjak (noreply@blogger.com)
Saturday February 15th, 2020 at 6:05 AM

Dinesh Dutt, a pragmatic IP routing guru, the mastermind behind great concepts like simplified BGP configuration, and one of the best ipSpace.net authors, finally decided to start blogging. His first article: describing the impact of having 256 100GE ports in a single ASIC (Tomahawk 4). Hope you’ll enjoy his musings as much as I did ;)

A Crash Course In Thermodynamics For Electrical Engineers by Lewin Day
Friday February 14th, 2020 at 9:56 PM

It’s a simple fact that, in this universe at least, energy is always conserved. For the typical electronic system, this means that the energy put into the system must eventually leave the system. Typically, much of this energy will leave a system as heat, and managing this properly is key to building devices that don’t melt under load. It can be a daunting subject for the uninitiated, but never fear — Adam Zeloof delivered a talk at Supercon 2019 that’s a perfect crash course for beginners in thermodynamics.

Adam’s talk begins by driving home that central rule, that energy in equals energy out. It’s good to keep in the back of one’s mind at all times when designing circuits to avoid nasty, burning surprises. But it’s only the first lesson in a series of many, which serve to give the budding engineer an intuitive understanding of the principles of heat transfer. The aim of the talk is to avoid getting deep into the heavy underlying math, and instead provide simple tools for doing quick, useful approximations.

Conduction is the area first explored, concerning the transfer of heat between solid materials that are touching. Adam explains how this process is dependent on surface area and how this can be affected by surface condition, and the reasons why we use thermal paste when fitting heatsinks to chips. The concept is likened to that of electrical resistance, and comparisons are drawn between heat transfer equations and Ohm’s law. Thermal resistances can be calculated in much the same way, and obey the same parallel and series rules as their electrical counterparts.

With conduction covered, the talk then moves on to discussion of convection — where heat is passed from a solid material to the surrounding fluid, be it a liquid or a gas. Things get a little wilder here, with the heat transfer coefficient h playing a major role. This coefficient depends on the a variety of factors, like the fluid in question, and how much it’s moving. For example, free convection in still air may only have a coefficient of 5, whereas forced air cooling with a fan may have a coefficient of 50, drawing away 10 times as much heat. Adam discusses the other factors involved in convection, and how surface area has a major role to play. There’s a great explanation of why heatsinks use fins and extended surfaces to increase the heat transfer rate to the fluid.

With the basics out of the way, it’s then time to discuss an example. Given the talk is aimed at an electrical engineering audience, Adam chose to cover the example of a single chip in the middle of a printed circuit board. In three dimensions, the math quickly becomes complex, with many differential equations required to cover conduction and all the various surfaces for convection. Instead, the simulation is simplified down to a quasi-1-dimensional system. Some imperfect assumptions are made to simplify the calculations. While these are spurious and don’t apply in many circumstances, chosen properly, they enable the simple solution of otherwise intractable problems — the magic of engineering! After showing the basic methods involved, Adam shows how such an analysis can be used to guide selection of different cooling methods or heatsink choices, or make other design decisions.

The talk is a great primer for anyone wanting to take a proper engineering approach to solving thermal problems in their designs. And, as a final party piece, Adam closed out the talk with a demonstration of a heat transfer simulation running on the conference badge itself. Thermodynamics can be a dry topic to learn, so it’s great to see a straightforward, intuitive, and engineering-focused approach presented for a general technical audience!

Toyota's blocky, function-first 4Runner has made a name in SUV and off-roading circles as a reliable-as-a-rock brick that will go nearly forever and without much care or feeding. A donkey without the bouts of recalcitrance. A camel without the spitting. A faithful dog without the fur. While the current 4Runner is now in its 11th year in production, making it old in modern car terms, those looking for off-road capability favor the durability of proven mechanicals and basic construction rather than the latest and gee-whizziest. And because Toyota has adhered to this very simple formula, 4Runner sales have plodded along steadily without much feature updating over the years.

Well, that changes now, because the 2020 4Runner offers all the latest features in the Toyota box of tricks, making it perhaps the best it has been since a V8 engine option was pulled in the 2000s.

First off, all the implied off-road performance of the 4Runner is fulfilled by the TRD Pro version ($51,419 as tested), with serious off-roading suspension, clingy all-terrain tires, several terrain modes for rocks, sand, downhill, and mud for the four-wheel drive system, skid plates to protect the differentials and other vulnerable pieces underneath, and a few special trim pieces that others in the know will recognize. The 4Runner can tow 5,000 pounds (2,268 kg), as well. However, 4Runners can also be had in less trail-ready versions for more dedicated street use like the SR5, SR5 Premium, and Limited, in both rear-drive and four-wheel drive. In the dirty and muddy, the 4Runner TRD Pro essentially matches Jeep-levels of capability, which may anger the Jeep faithful, but there it is.

Open Your Organization to Honest Conversations by by Dina Gerdeman
Friday February 14th, 2020 at 7:07 PM

Why Are We Polarized? Don't Blame Social Media, Says Ezra Klein by Nicholas Thompson
Thursday February 13th, 2020 at 8:03 AM

The Vox editor explains why there's no chapter devoted to Facebook or Twitter in his new book about how the US is more divided than ever.
Read the whole story

I blame professional sports
Chicago, Illinois
Next Page of Stories